One sunny morning we enjoyed a nature walk to the forest. The preschoolers were able to explore their surroundings and observing bugs, flowers, trees, leaves, rocks and flags. As we headed down the sidewalk towards the path Isaac identified the change to the flag pole and said “Look there is two flags on the school! One is a rainbow flag and another one is Canada day flag”.

As we walked a little bit ahead, Myla picked flowers from the side walk and said “These white flowers are my favourite flowers.” 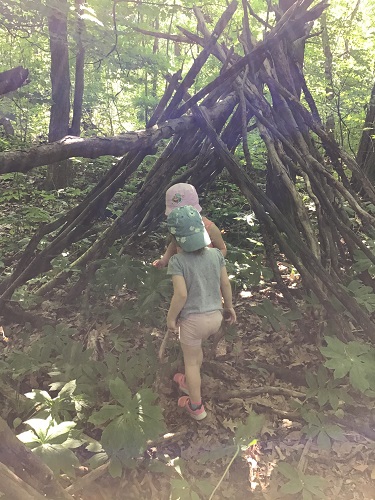 Once inside the forest the preschoolers engaged in deep play as they climbed on fallen trees and worked cooperatively to lift large branches. They also discovered a stick house that was built of branches. Emily said “I like this house and took turns standing inside the structure. Austin was actively engaged in a hunt for bugs, finding a snail he excitedly exclaimed “Look I found snail and I am taking it home.“ While searching for bugs he also discovered spider web and shouted to his peers and said “Guess what I discovered spider web”. He was very proud of his discoveries. 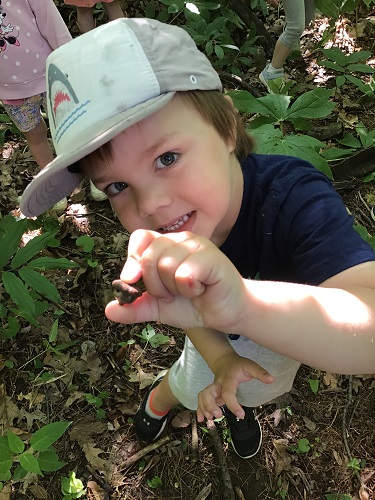 Devyn engaged in deep play while climbing up the hill from one side and going down the other side of the hill and saying,” Look, I am fast”. Henry, Nicolas and Easton discovered hole in the tree and Paige asked them,” What do you think is in there?” Easton said “Animals live in there “. Henry pointed to the tree and said “How large is the hole in the tree!” while looking inside after testing the depth with fallen sticks and letting them fall.

Eliora was interested in the trees looking up at their lofty branches and said “why do we have these trees?” Together we identified the benefits of the trees, such as producing the oxygen we breathe and storing carbon dioxide to help protect the environment. 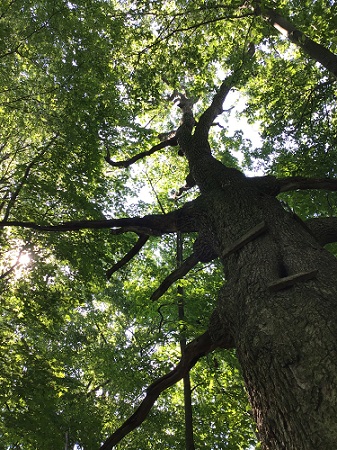 When we asked what the group liked about the forest many shared that their favourite part of the forest was being able to play in it. The preschoolers engaged in deep play, communicating with each other, sharing their ideas. Exploring the forest gave the chance to the preschoolers to discover more nature, while engaging in exploratory and locomotive play