The toddlers at RisingOaks Early Learning | Our Lady of Fatima explored gourds throughout an entire week in October. What started off as Educator Vanessa bringing in gourds to explore, quickly morphed into a week long journey as we engaged in various types of play and experiences with these natural loose parts. The gourds were set up as an easy provocation on our loose parts table, then Vanessa stepped back and observed the children as they familiarized themselves with the new objects in the room. The conversation and observations made by the children were phenomenal. 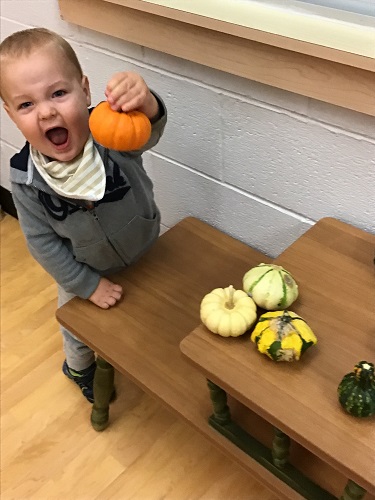 Kai said, “I found a pumpkin,” then later added, “it grows in the field!” Jacob and Nathan correctly identified the colours of some of the gourds by labelling them as “a yellow one” and “green”. Jacob also used his sense of touch as he realized “I touch it. It’s bumpy!” While Elijah thought “it’s squishy” and when asked why, he said, “cause it has rocks on it.” With these statements in mind, Kai made a wonderful connection to the gourds when we were outside by exploring one of the stumps and saying, “it’s bumpy too!” By using our senses, we engaged in exploratory play and discovered a lot about the physical appearance of the gourds!

The next day we engaged in a creative play experience with the gourds! Lucas determined that the gourds “roll” and even Jacob discovered that they roll down ramps by dropping one down our climber, so we decided to expand on this by doing ‘gourd rolling’ with paint. We provided some fall colours like red, yellow, and brown and each child dropped some paint onto a piece of paper before adding the gourds and rolling them around! Nathan excitedly exclaimed “wow!” at each painting that was produced. Jacob eagerly named each colour as he dripped them onto his paper. Each picture was a unique masterpiece based on how fast, hard, and long we rolled the gourds!

We got scientific with the gourds next! First, we explored the concept of ‘sink or float’ by adding a gourd to a water bin! We were curious to see what would happen. Jacob, Kai, and Elijah all grew very excited when they saw the gourds floated on top of the water and exclaimed “it’s floating!” Later, we selected a few gourds to bring outside and added them to a sensory table. Vanessa explained that we were going to see inside of the gourds and engage in a special experiment. Carefully, Vanessa cut the tops off each gourd and showed the toddlers what was inside. Kai yelled out “seeds!” Vanessa asked if they looked the same or different inside and Jacob and Elijah agreed they looked “the same” because they all had seeds, Vanessa pointed out how she thought they were different because of the colours and Jacob said “Yeah! Orange and green!”. Matilda reached out to touch one of the seeds and quickly withdrew her hand at the slimy texture. After examining the insides, we set them back into the table and got out our supplies. We carefully added some baking soda and food colouring to each gourd, then some vinegar to a separate bowl. Each child was offered a dropper and when the ingredients combined together Nathan yelled out “whoa!” as the bubbles erupted! It was a wonderful opportunity to further engage us in exploratory play as we combined many senses throughout these activities! 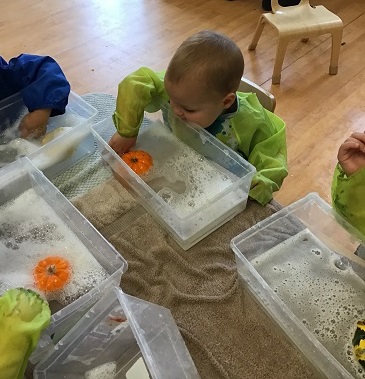 Finally, to end our week of fun, we reused the gourds from our science experiments in an upper body strengthening activity which engaged us in risky play! We provided safety goggles, mallets, and hammers for the children to use and invited them to break the gourds into pieces! Jacob was eager to begin and quickly donned the goggles and smashed away with his hammer! Chloe was hesitant about the goggles and only chose to hit the gourds a few times. Quinn observed at the beginning but, after watching her peers, she took her turn and ‘tapped tapped tapped’ gently. Lucas talked his way through his turn by labelling that he was, indeed, “tap tap tap”-ing the gourds. Zyaire was extremely curious about the pieces and kept picking them up and exploring the way they felt. Not only did we strengthen our muscles, but we explored trajectory as well; depending on how forcefully we fit the gourds, determined how far the pieces went! 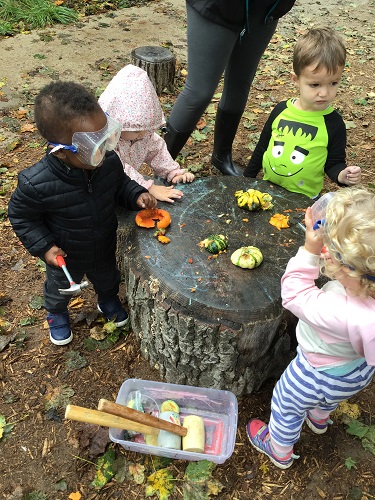 Of course, we kept a few gourds in the classroom so that we can continue our play with them. We’ve seen the children place the gourds in muffin tins as they explore spatial awareness and symbolic play, cook with them as they engage in dramatic play, and even add them to their object play with cars! I wonder what more they can do with these gourds? I wonder what would happen if we explored pumpkins, along with gourds? Perhaps we will have to add them to our classroom and see!