April showers bring May flowers- and what else comes along with the rain? Worms! The toddlers at RisingOaks Early Learning | Our Lady of Fatima have been fascinated with worms and finding other insects on our playground these past few weeks! It started off when Brody broke off a piece of bark from one of our large stumps and found a grub hidden inside! Educator Samantha used a stick to pick up the grub so we could have a closer look. “It’s a big bug!” Brody said as he studied it. When the grub fell to the ground, Chloe instantly bent down and picked it up, demonstrating no fear as she held the small insect in her hand! 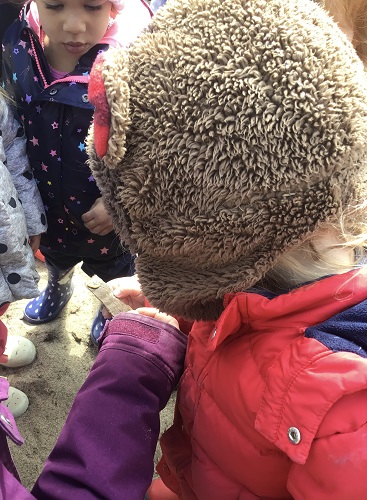 This promoted a search for more insects. The group ran over to search other stumps and hiding places around the playground for more bugs, fostering inquisitive play and detective skills. This interest carried on for several days until we found a centipede hiding in a different stump! Brody, along with Layla, Ava, and Calvin worked together to pull off more bark. In the process the centipede scurried away out of sight; Educator Samantha tried to help them find it, “look it’s right here” she said as it continued to crawl away and hide. We watched how fast it crawled and noted how long the legs were! 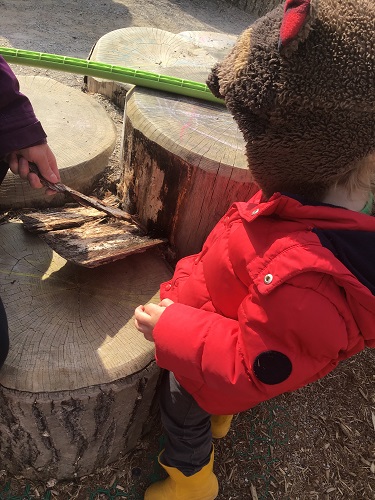 Once the rain made the ground wet we began to discover the worms coming out from the ground! The first time we noticed them was while we were splashing in puddles. Chloe saw them and cried out “snakes!” “Those are worms,” Educator Vanessa told her. Educator Laura used a stick to pick up the worm so we could see how long it was and explained how they have many hearts inside their bodies. Later that day, while on our playground, Brody discovered more worms hiding under the mulch! This prompted a lot of conversation about them. 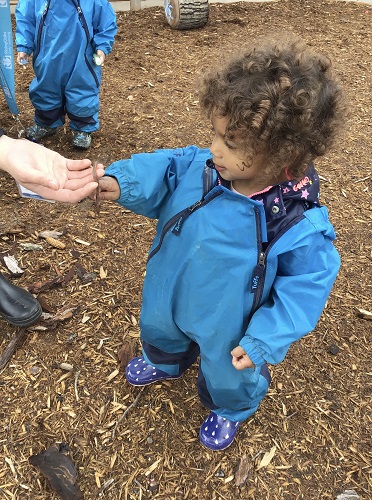 Brady’s discovery drew a crowd and Layla, Calvin, Mila, and Chloe all bent down to see what he found. What we saw was a big worm, about six inches in length, and quite round! Brody picked it up and Educator Samantha helped him place it on a piece of bark before setting it on the table so we could all see it. “There it is!” Brody cried as it began to move. “Oh look, it wiggles!” Brody laughed and as we watched the worm wiggle we discovered how it moved forwards and backwards! We wondered: where was the worms head? (The answer: on the smaller side of its body! It contains a mouth and glands- but no eyes!).

As the worm moved we also saw how it got smaller and longer too depending on how fast it moved! Educator Samantha had no problem picking up the worm and inviting the children to touch it. Calvin was weary of it, saying “no, it’s slimy”. Layla reached out with a single finger and poked at it, while Chloe grabbed it with her hand! We had to remind them that the worm is a living creature and we need to be gentle with it.

Finally, after we had the chance to look at it closely, it was time to put the worm back in its hole. We gave it some water, as we discovered that worms were wet and slimy, and watched as it burrowed into the grass and underground until it was out of sight. “Bye worm” Brody said as he stood at the fence watching it disappear. “See you later!” 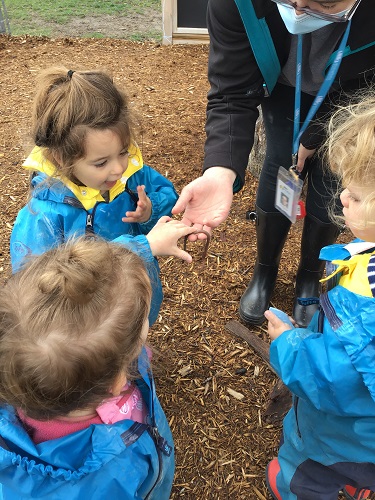 The insects were a wonderful way for us to engage in exploratory play. We used our sense of touch as we felt the worm, as well as discovered how it tickled our hands when it moved while we held it. We used our sense of sight as we studied the different insects, as well as incorporated mathematical concepts as we compared length and size- some worms were longer and rounded than others, and the grub was a lot smaller than a worm was. We learn so much through the use of our senses, so having the freedom to explore with them and connect with nature and the world around us is a huge developmental benefit for children!

How does learning happen states that “children are engaged learners when they express joy and wonder in their encounters with the environment, the natural world, and other people (HDLH page 37)”. I think we can all agree that the toddlers expressed their joy and excitement while exploring the insects, and the fact that we were engaged in the natural environment helped foster that connection to nature and the world around us! In these moments, the toddlers were authentically learning through nature and play!