Our mystery started on a Wednesday morning when a mysterious shoe print appeared in the Junior camp class. Everyone investigated each other since they discovered the suspicious footprints. Our campers had turned into detectives that were busy using their investigation skills to find the person leaving all the clues. The group thought that Joshua was a close match but he wasn’t quite a 100%. Even more clues were left in the classroom this week. Here is our evidence we found:

Evidence #2: A note that read, “I work in the preschool room…”

Evidence #3: Another note that read, “I have brown hair” 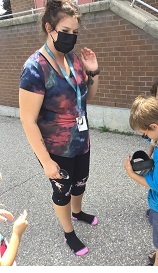 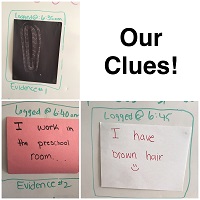 Elora went up to the educator Tracey and said, “Hey you work in the preschool room sometimes with my brother. But, you do not have brown hair, so it’s a close match, but not quite.”

The children were using the process of elimination. Each clue brought them closer and closer to finding the suspicious person. So after a week of clues and checking everyone’s shoes, the children found that the Early Childhood Educator Corine was the one who belonged to the footprint! The campers walked up to Corine, noticing that she had brown hair, and confirming that she works in the preschool room. Plus, her sandal was a perfect match!