While exploring the playground during outside time, the toddlers have found many different types insects. The start of the insect they found a large spider. The spider was about the size of a twoonie and had lime green features on the body of the spider. Educator Sheri nervously used a ladle and a lid to put the spider over the fence. Hadlyn was watching the spider as it started to come back as Sheri put it over the fence and said, “Sheri it’s coming back!” 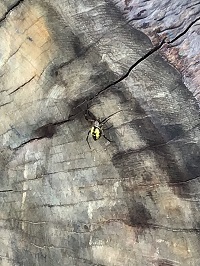 The toddlers continued their exploration by looking for more bugs everywhere. We pushed a stump over to see if there was any under it. The stump uncovered two earth worms and a potato bug (or as Elijah calls them rolly pollies). Sophia kept getting closer and closer to the worms, Sheri asked, “Do you want to feel the worm, I wonder how it feels?” Sophia was unsure at first but then went ahead and touched the worm telling Sheri, “It feels dirty and slimy.” 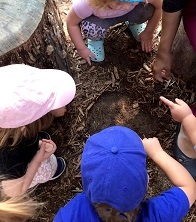 Kai and Jacob were also interested in the bugs and were observed not wanting to be near them. The boys could be seen backing up if they got too close to the worm. We continued looking under the tree stumps finding more worms and potato bugs. Under the last stump we found a creepy crawly under it with lots of legs! The creepy crawly moved so fast and was trying to hide under the mulch after we found it we couldn’t identify what type it was.

When we went inside we expanded on the insects that we found outside. Sheri brought out insects that were encased in plexy glass. We looked at each one and identified their names. This allowed for the toddlers to expand on their vocabulary and enhance their language skills.